A few months ago, when I started my research into the painting techniques of old Dutch Masters, I learned a lot about varnish. These days when technicians in a museum restore or clean a painting they usually take off the varnish layer first. Varnish is in fact designed to be removed, and always has been. Even in the 17th century varnish was considered to be a temporary protection medium, something that completely baffled me and something I wanted to know more about. In modern times we add a layer of varnish to protect a painting from, well mostly dust. Living rooms and musea are not all that acidic and damaging to old paint anymore and most of the damage currently done is by using wide spectrum lighting like neon bulbs and flood lights. I'm still confused as to why the National Gallery in Washington DC allows visitors to use cameras. Even accidental flashing can damage a painting and I can't imagine that everyone remembers to turn of their flash when they go in. Lighting created a completely different set of problems back in the days when those painting were originally created. Back then they had good reason to add a layer of varnish. Houses were dark, poorly ventilated and murky smoke filled living spaces. Adding varnish ensured that paintings could be cleaned after many years of smoke from pipes, furnaces and fireplaces had left a thick layer of grime on the surface of an oil painting. We now call that 'patina' because it gives use the sensation that these objects are really old. 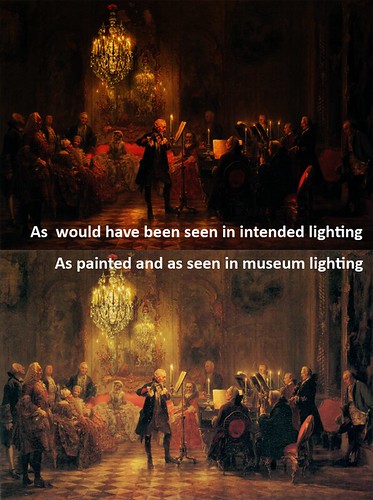 As I was thinking about the amazing fact that back then they already knew that varnish could be removed, it occurred to me that this fact had another consequence. Paintings were displayed in rooms without modern lighting. All they had were candles, lots and lots of candles and mostly just one or two candles. Does that knowledge change the way we should see paintings? I believe so. Besides their technical skill in reproducing a person's face, expression and demeanor, they must surely have understood that they could enhance a painting's appearance by designing it specifically for viewing by candlelight. For example, take the painting displayed on the right by Adolph Menzel called Flötenkonzert. The bottom version is as he actually painted it and as you would currently see it in a museum. The top version was modified in Photoshop to adjust for the type of lighting in the room it would be most likely displayed. The original dimensions of the painting are 142 by 205 cm, which is quite large. Imagine that it would be displayed in a room more or less the same size as the one displayed in the painting. Or perhaps a good way of thinking about this painting is as a mirror. If we look at the amount of actual available light, we see that there is one large candelabra (the other one is actually the first one seen in a mirror) and a number of smaller candles for the musicians and for the decorations on the wall. It is safe to say that these candles together can not produce the amount of light as seen in the original bottom version. If you've ever tried to light your house with candles you will know what I mean. My understanding now is, is that the painting was deliberately over-lighted in order for it to show up as intended by candle-light. It might even be possible that when this painting was seen with the same amount of lights, or even the actual lights as seen in the image, the painting would create an odd sensation of looking into a mirror. I admit that I do not have official evidence for this claim other than to say that in my mind the top image looks much more natural than the bottom version, even though the bottom version is as you would see it today.

What does that mean for how we see paintings today? Most paintings of that era are on display in large well-lit rooms. You can get close to the painting and see all the details, or lack thereof. But that's probably not the way we are supposed to see them. I would be very eager to see the Rembrandts in the National Gallery of Art in Washington DC during a night 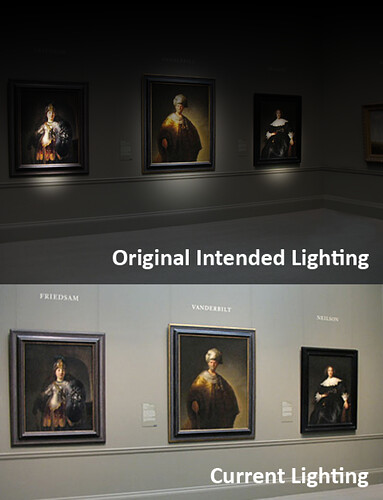 tour with all the lights turned down and perhaps illuminated by a few electric candles. My guess is that the paintings would generate even more visual luster than they already do, and they certainly do. I don't think I can convince the MET or the Nationally Gallery to light a few candles in their halls, so I tried to re-create just a little of what it might look like. Below is a similar modification of a photo of a number of Rembrandt's. Perhaps the change in lighting is even stronger than in the other case. Rembrandt is known for his usage of stark differences between light and dark. This effect and technique is known as chiaroscuro and Rembrandt in my eyes was and is the absolute master. So if he was so extremely good at creating illusions between light and dark, would he have been casual about the light he new his paintings would be seen in? Personally I don't think so. I think he must have been very careful indeed and he must have known the effect of candlelight on his works. The digital alterations to this photo can't possibly do it justice but I so hope to once see such a painting in the proper lighting.

In the coming months I'm going to experiment in my own painting to see if I can make better images if I keep in mind that the style of painting I'm after is intended to be seen by small intense moving flames of light. I'm probably going to be stoned for this but I'm not someone who professes that paintings should be done in natural lighting. In fact our control over light using artificial means is so much more sophisticated that using light coming through a window will probably render your painting useless if you intend it to be seen in large dark rooms with candle light.